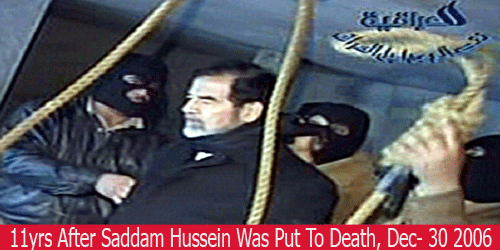 BAGHDAD, Dec. 30 — Former Iraqi president Saddam Hussein was hanged in the predawn hours of Saturday for crimes against humanity in the mass murder of Shiite men and boys in the 1980s,

He was Sent to the gallows by a government backed by the United States and led by Shiite Muslims who had been oppressed during his rule, Iraqi and American officials said.

In the early morning of Saturday, Dec- 30 2006, Hussein was 69, was escorted from his U.S. military prison cell at Camp Cropper, near the Baghdad airport, and handed over to Iraqi officials. He was executed on the day Sunni Muslims, of which he was one, were to begin celebrating the Muslim festival of Eid al-Adha.