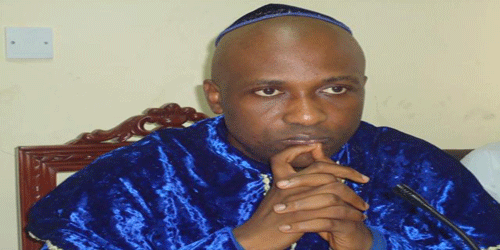 -All Progressives Congress governors will have issues such that there will be attempts to break up the party.

-PDP is dying gradually and the party needs a lot of prayers. There will be crisis in the party. Some PDP governors will work for the APC. PDP has not really addressed its issues.

-$1billion earmarked to fight terrorism may not make much difference. Terrorism has come to stay in Nigeria. Except for the root of what is causing terrorism is addressed.

-The economy still has many issues to be addressed. Nigeria will still borrow.

-Some banks will experience issues and this will affect the economy. Access, GTB, Diamond, Stanbic IBTC banks may face query from the Central Bank of Nigeria (CBN), and they may also be shaken financially.

-There will be a new procedure for lending. There will be changes in deposit and withdrawal commission. Some Managing Directors of Diamond Bank, First Bank, and Access Bank will have problems.

-We should pray against fire outbreak and armed robbery attacks in First Bank, Zenith Bank, Fidelity Bank and Heritage Bank.

-Some new banks will spring up in the year, and some may work without a licence. A lot will change in the banking sector.

-Government will explain how they have channeled funds from looters, but it won’t help the economy. More funds from looters will be returned to the coffers of government, and they need to look into how the money will be disbursed.

-Government needs a lot of prayers.

-Whoever wants to contest against Buhari must consult God very well. Only one anointed of God will unseat Buhari.

-Some markets will be shut down. Let’s pray for losing market leaders in 2018.

-They should also be watchful of scandals. If the president puts the right people in place – people who understand how to improve the economy – that is when we can have a better economy.

-However, as things are now, only God can stabilize Nigeria’s economy in 2018.

-Pensioners will still complain. There will be fluctuations in Forex. Union Bank, First Bank, and Keystone Bank will have problems with Forex. Some bank managers may be indicted for fraud.

-States will have a lot of troubles.

-Imo State, if APC does not field the right person, the party will lose that state. Imo State should also be watchful of unexpected troubles and political riots.

-Osun State, if APC brings out the right candidate, they can still win the state.

-Oyo State, only if the APC gets the right candidate, will the party win.

-Abia State, in the second term of the governor may experience challenges.

-Delta State, It won’t be easy for the APC to capture Delta,

-Enugu, and Rivers states. Some senators and members of the House of Representatives will lose re-election bids.

-Presidential Election, Buhari will do a lot of alliance and political strategies, but his aides will create problems for him.

However, if there’s a right candidate, Buhari will lose. Buhari’s second term bid will create problems for Nigeria and for Buhari himself.

-The only people who can hold Buhari’s administration together is Fashola and Amaechi. However, for second term, their roles will be threatened.

-There will be changes in APC leadership in Lagos State. Tinubu may not be as active and another person will take his position.

-Atiku’s eye on the presidency will be very serious. He must consult God very well on taking the right step.

-James Ingilari would have been a good candidate, but they will not access him. He’s the only person that can beat Buhari.

-Sule Lamido will face many controversies. There will be an imposition of a candidate in the PDP, and the party may break up.

-After 2018, these are the people (if they’re alive) to watch for as regards the 2019 presidential election – Tambuwal, Saraki, Fashola, Amaechi, Amosun. Besides that,

-PDP has to put their house in order if they want to remain a party.

-Buhari is weak. He doesn’t have the strength to move the country forward. Cabals have hijacked Buhari’s government and he doesn’t understand the system.

-Kogi State, the government house is vacant if the PDP has a good candidate. Some governors trying to get the second term will be disappointed.

-Oyo State, PDP is dying. In Ondo State, Akeredolu may fail a second term bid if he’s not careful.

-Benue State governor must be watchful so his second term will not experience challenges. Some of Buhari’s loyalists may still betray him.

The next APC convention will experience troubles as there will be a division of interest.

-The 2018 budget will not help the economy, and it will not be accelerated as expected. The budget may still cause a recession for the country.

-Let’s pray not to lose any major Nollywood artiste or Senior Advocate of Nigeria (SAN).

-Let us also watch against protest in the country. Nigeria Army should be prepared for an unexpected attack.

-IGP, Chief of Army Staff, may face more challenges. There will be an exposition of illegalities in the military.

-Let’s pray air force will not land-crash. There will be changes in the aviation sector.

-Ethiopian should pray against technical troubles. There will be scarcity of aviation fuel because the price will increase.

-Some pilots may go on strike. Some Arik staff may protest. FAAN must be careful of problems.

-Dangote cement and BUA may have problems. Dangote will shut down some of his companies.

-The government will take the issue of tax very serious.

-There will be troubles in the judiciary, and there will be refurbishments of some courts.

-Some fake drugs of malaria will be detected. Nigeria will improve in the agriculture sector. The government will also make money from mining, but they will not take it very seriously.

-There will be a lot of expositions in 2018. Let’s pray not to lose any musician.

-There will be changes in ASUU leadership. A prominent person may resign from Trump’s cabinet.

-We should pray not to lose a prominent pastor.

-The government will try to bring up a law against churches but the law will not go far.

-We should pray against the ethnic and religious crisis.

-Dasuki’s issue will come up next year, and they will attempt to indict him, but he will be free.

-Kanu’s issue is a dead issue. Another Biafra leader will come up, but won’t be able to actualize what they’re clamoring for.

-Olubadan should pray against bereavement again. Also, the issue the Olubadan has with the Obas; he won’t be able to address it.

2019 Nigeria General Election Timetable Is Out

1 responses on "Buhari Will Lose 2019, Tinubu Overthrown In Lagos Politic, Prophecies Of Ayodele"