How To Build A Successful Business By Elon Musk 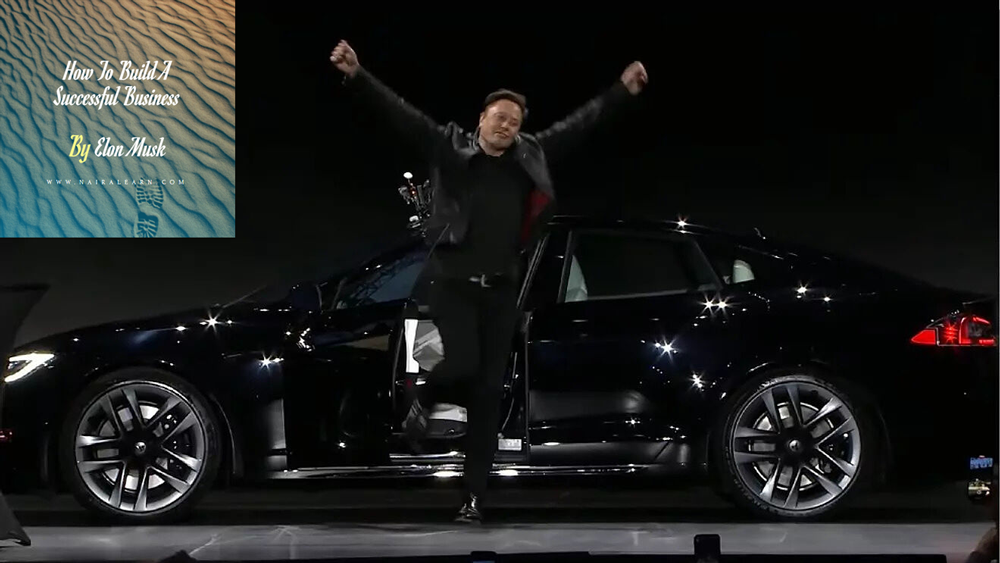 How To Build A Successful Business By Elon Musk

One sure way of building a successful business is starting with whatever you have, though starting a business is not that easy, not as easy as most motivational speakers paint it

Is harder to build a business, harder when you are just starting and one thing you should acknowledge is that the success of a company, a business is more about how quickly are you to fix the mistakes

So when you are planning to start a business, try to kill fear, don’t try to avoid making mistakes, mistakes are part of business building, what is not ok is allowing mistakes to last long, so when you make mistakes by all means necessary try as fast as possible to fix it.

I learn whatever I need to learn to accomplish an objective. I think most people can do this but they often self-limit. People are capable of more than they think, but what I, found is if you simply read a lot of books and talk to people you can learn almost anything.

When you are building something new there will be mistakes. And it’s important to recognize those mistakes, acknowledge them and take corrective action.

As I said earlier the success of a company is more about how quickly are you to fix the mistakes, not will you make mistakes?

If you see the difference between a start-up that is successful and one that is not and it’s because a successful one recognized mistakes fixed them very quickly and an unsuccessful one tries to deny that mistakes exist.

I think that the physics framework is really where I learned it. And it’s very effective for learning counterintuitive things that are obvious.

It’s not like I like a failure but if you only do things that are certain to succeed that you are only going to be doing very obvious things. In any job, you have to do your chores, I think to be successful in almost anything you have to do the tough stuff as well as the enjoyable stuff.

People assume too many things to be true without sufficient basis. So It’s very important that people closely analyze what is supposed to be true and try to build up, try to say, let’s analyze things from first

Principles not by analogy or not by convention. If you assume things are true by the convention which is actually what most people do then it’s difficult to gain insight into how things can be tettered.

It’s the foundation of rational thought. I think it is helpful to have kind of a physics framework for looking at things

But then after all that it still seems like this is the right way to go then that I think gives one a fundamental conviction and an ability to convey that conviction to others, and convince them to join and

that’s what a company is, it’s a group of people who come together to create a product of some kind and so if you can convey that and answer the concerns that people have convinced then this is something that needs to be done it’s important and here is a path to do it even if that path has a lot of danger associated with it risk and maybe it won’t succeed.

I think certainly you need to be very driven and have a high pain threshold. It’s hard starting a company you have to be prepared to work constantly from when you wake up to when you go to sleep you have to be willing to deal with a lot of difficult problems and thorny problems.

They have to be willing to deal with an enormous amount of stress and you just got to push yourself supper ard. I wouldn’t recommend it to most people. How can I provide advice that would be most helpful and I’m not sure I’ve

Given enough thought to give you the best possible answer but I think certainly being focused on something that you’re confident will have high value to someone else and just being rigorous in making that assessment.

Because people tend to natural human tendency is wishful thinking. So a challenge for entrepreneurs is to say well what’s the difference between really believing in your ideas and sticking to them versus pursuing some unrealistic dream that doesn’t have merit and it’s a really difficult thing to tell can you tell the difference between those two things,

When you create a company, well what is a company is a group of people gathered together to create a product or service and that’s all the company is and so you have to believe in what you’re creating and know in your heart and mind that this is something that matters and that the world ought to have and I think it’s important to investors to show that you’re all in and I think for example

With Tesla’s fact that I invested all the money, I had to borrow money from friends to pay the rent in 2008.

The fact that I was all in, I think made a huge difference to the investors to convince them to invest in Tesla. At the same time people to join you in the endeavor, you should hire people that are passionate about what you’re doing. So it’s not just that they’re not just there for the salary.

That’s I think that’s the way to do it. Starting a company is a very tough thing. You should certainly expect that it is going to be very hard. it’s going to be harder than getting a job somewhere by a pretty good margin and the odds of you losing the money that you’ve invested or your friends invested is pretty high.

YOU MAY ALSO LIKE: 7 marketing mistakes to avoid when promoting your Business

I mean those are just basic facts. If you don’t mind things being hard and high risk then starting a company is a good idea otherwise it’s probably unwise and will certainly stress you out.

So I think you have to be pretty driven to make it happen. Otherwise, you will just make yourself miserable, and then in creating a company how do you make the best product or service possible.

You know companies that don’t make good products or services just shouldn’t exist, that’s just pretty logical. I just actually don’t care about motivation give it everything I’ve got irrespective of what the circumstances may be. You just keep going and get it done.

I think my life would be very unbalanced by most people’s definition since I work quite a lot and I’ve probably put in between 80 and 100 hours a week of work which is a lot and then most of my remaining waking hours are spent with my kids so that’s my life.

Probably I have a high intrinsic drive yeah I can just get really sort of set on something and then I just kind of I’m able to keep going in that direction.

Well, certainly I invite you to apply for a job at Solar City or Tesla or SpaceX and if that doesn’t work for whatever reason then I guess apply at other companies in that arena or try starting a company.

This was a voice transcript from the Elon Musk podcast, Watch the video version below

What to have your say on this ”How To Build A Successful Business By Elon Musk” kindly drop your comment using the comment box. Stay safe and best stay happy for happiness is possible

7 marketing mistakes to avoid when promoting your Business