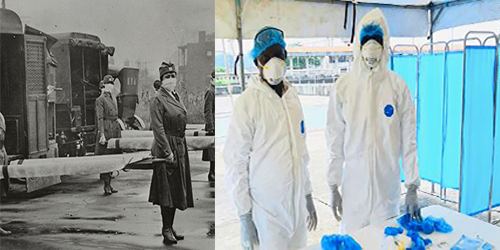 We like to think we are more sophisticated today than those who came before us. But in the history of the pandemic, world war and coronavirus crisis of today history will in one way or the other repeats itself 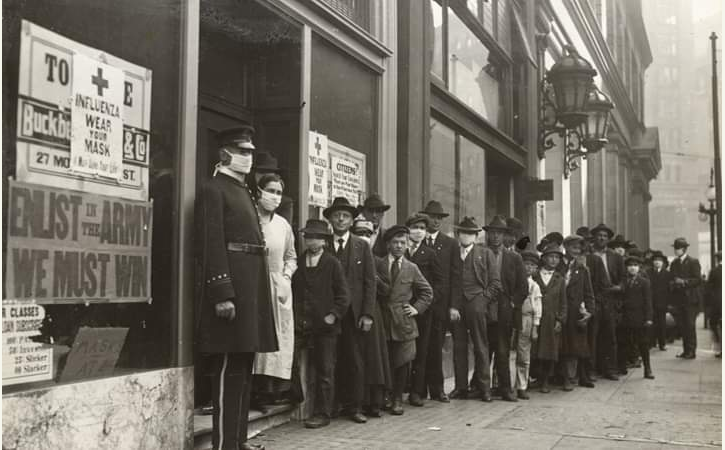 It shows people waiting in line to get flu masks on Montgomery Street in San Francisco in 1918. (Hamilton Henry Dobbin / California State Library). They were wearing masks already in 1918. Remember that the flu would go on to kill more people in 1919. Just check how long it took us to start wearing masks!

History always repeats itself, we are witnessing history without realizing it. The question is how is Africa responding? Hundred Years from now, people would write about this time.

100 years before now something of this nature ( Pandemic ) Took Place, Millions of people has been reported to have lost their lives, the economy was affected and there was a recession for 10 years, in the history of pandemic, world war and coronavirus crisis

We have all read about the First World War that ended 102 years ago in 1918, and the United States became this superpower we have today. Now, China is trying to take the position of world power.

I am beginning to think that it was also due to the pandemic of 1918 and 1919. That pandemic was deadly just like the coronavirus is today.

It was said to have killed between 50 million and 100 million people because science and medicine, communication, and the rest were not ‘maybe’ at the same level they are today

I have realized we are not more knowledgeable than those who were there before us. In the United States, more than 750 thousand people died. In Nigeria thousand undocumented people died also

But most people died elsewhere in the world. Europe was battered with millions of dead. Let me recap this.

So, the First World War had just killed millions of people in Europe between 1914 and 1918.

But the pandemic in one year killed more people than all the wars combined. You see how dangerous pandemic is, it kills faster, it kills more, being an enemy to all, to Christain, Muslim, Traditionist, To white and Black, to rich and poor

Let me recap again. First, the US was not affected by the war, then the pandemic ravaged the world while US suffered damages but not as much as elsewhere.

It started on September 1, 1939. The US would still not be severely affected. By the time the second world war would end on September 2, 1945, Russia, Europe, and the rest would be devastated. Africa nations were not left out, it was home of the slaves

So when people or science tell you that there is a possibility of another world war coming after the coronavirus, post-pandemic is over. all you need do is prepare and best pray the world never witness such because the Government in this part of the world called Africa Nigeria has zero plans for his nationals

The world would be in tatters. The US would prosper and China would be spared. But because there was not much demand for products and services in the world as the war raged in Europe, coupled with the pandemic

The economy of the world would collapse. The war and the pandemic would lead to the Great Depression in the United States and elsewhere for 10 years between 1929 and 1939.

As a result, for those ten long years, between 1929 and 1939, the United States and the world would suffer the worst economic downturn in the history of the industrialized world.

But the United States and China would be lucky again, because just as the Great Depression was about to end, the second world war exploded in Europe in 1939, and consumed millions of people.

Because these two countries where prepared, The US will prosper as Europe may collapse and China and Asian countries would recover. Africa will be left behind

Africa nations will continue to be underdeveloped and their raw materials were stolen and keep on being stolen to elsewhere in the world, to develop everywhere else in the world

While the leaders of Africa mostly fanatically corrupt will loot Africa and went to western countries to develop and boost their economy In the history of pandemic, world war and coronavirus crisis is going to be harder for Africa nation with zero plans

This is our Great Depression that is about to start. Oil prices have collapsed. Trump is signing an executive order shutting the United States to the world to give jobs to Americans only.

Exports would collapse, importation of goods item prices will skyrocket and Africa would suffer greatly, as the exchange rate between dollar and naira goes up, according to WTO, the IMF, the World Bank, and everyone else.

As I Mbonu Watson Write To You, while you read from where ever you are in the world, the reality is that Africa Nationals Are Busy Borrowing From IMF, World Bank, China and elsewhere in the world

Not just borrowing, But what we consider as a bad loan is giving to Africa countries, which will also be looted by the same Africa Leaders, May God help us.

There is likely going to be a war that would follow after this pandemic, Hundred years from now, you and my humble self Mbonu Watson in the face of historians would write about this. Most of us would be dead.

But we would have lived through the coronavirus pandemic and the economic consequences that followed it.

Stay Strong, Plan Ahead. It Can Only Be Better When You Prepare To Have Peace and To Have Peace In Life You Have No Choice But To Prepare For War

My Name Is : Mbonu WATSON C

Coronavirus Crisis, Things You Can Learn Online Live From NairaLearn

Finding The Answers To Coronavirus Pandemic By Bill Gate

5 books You Should Read Amid The Pandemic, By Bill Gates
2k
SHARES
ShareTweet

0 responses on "In The History Of Pandemic, World War and Coronavirus Crisis"