Innoson Group VS GTBank..All You Need To Know

Innoson Group VS GTBank..All You Need To Know, Nigerians Reacts On Social 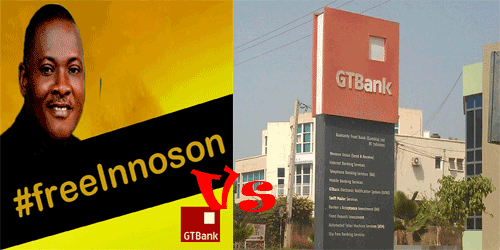 Innoson Group VS GTBank..All You Need To Know As the fight between Innoson Group And GTBank Persist, More Nigerians has promised to close down their personal and business Account With GTBank in solidarity with Innoson Group

Here Is The Real Story treading online, Innoson Group Vs. GTBank: 30 Key Points you need to know about their dispute

1* – At all Material time, Innoson Nigeria Ltd operates a Current Account with GTBank.

2* – Innoson obtained, and had repaid same, a loan of N1.3billion from GTB Which was secured with a legal mortgage of its properties valued at more than N1.4billion.

3* – Innoson discovered that GTBank imposed excess and unlawful charges in its Current account.

5* – Both parties ( Innoson and GTBank ) agreed to invite an independent auditing firm that will be agreed by both parties.

6*- At the end, MULTI-WINGS Consulting Firm of Auditors, was invited to properly audit Innoson Nigeria Ltd Current account No 0043753636 domiciled with Nnewi Branch of GTBank. The audit covers a period from March 2004 to Dec 2011.

7* – After the account was audited, it was discovered that GTBank had been illegally deducting excess bank charges on its overdraft facility to the Innoson to the tune of seven hundred and Eighty-Six Million, Two Hundred and Five Thousand, Nine Hundred and Fifty-Five Naira, Ninety-Nine kobo ( N786,205,955.99).

8* – GTBank was shocked at the audit report when the report was forwarded to it .They replied in their letter to Innoson on 20th January, 2012 that it will investigate the issue raised and will get back to Innoson on the Conclusion of its investigation.

9* – In the month of September 2012, GTBank wrote to Innoson that from their personal audit report, the excess bank charges was Five Hundred and Fifty-Nine Million, three Hundred and Seventy-Two naira ,Nine kobos ( N 559.3Million).

10* – Innoson agreed to their version and decided to accept payment from it in the spirit of amicable resolution.

YOU MAY ALSO LIKE: A To Z Importation Business Course

12* – GTBank refused and said that the best they can repay excess and illegal deduction is at 7% interest rate . This led to another disagreement between Innoson and GTBank.

The court also ordered GTBank to pay 22 % (percent ) interest on the Judgement debt until all the payment had been made to Innoson.

15* – In 2013, GTBank appealed against the judgment to the Court of Appeal, Enugu Division, appoxite appeal No: CA/ E/288/2013. *16* – The Court of Appeal, Enugu in a Considered ruling ordered GTBank to pay the Judgement debt of N6billion Inclusive of the accrued interest and any interest that would subsequently accrue thereon into an interest yielding account in the Name of the Chief Registrar of the Court.

17* – In its various affidavits, particularly at the Court of Appeal in suit no: CA/ E/288/2013, GTBank deposed that if it pays the outstanding Judgement debt of N6billion, much less the N8.5billion, it could go bankrupt and be out of business.

23* – GTBank, instead, appealed to the Supreme Court against the Court of Appeal’s decision where GTBank claimed through a motion in suit no: Sc /694/2014, that the Court of Appeal Judgement in Ibadan (CA/I/258/2011) was procured by suspicious means.

24* – On May 12, 2017, Supreme Court in its wisdom and rightly, dismissed that unfounded and exasperating claim of GTB against Innoson.

26* – Consequently, to save itself from paying the outstanding Judgement debts to Innoson, the GTBbank filed a petition against Innoson alleging forgery which led to the suit No: FHC /L/565C/2015 by Police.

27* – On February 17, 2016, Police properly and Competently withdraw the charges against Innoson, saying they needed to properly investigate the bank’s complaints first and see if they had merits.

28* – On September 1 , 2014 , GTBank secured an ex parte order on Innoson Nigeria Limited, dated September 1, 2014 with suit no FHC/L/CS/1119/2014 , filed before a Federal High Court in Lagos , between GTBank and Innoson Nigeria Limited , issued by *Justice Okon Abang* , ordering that , pending the hearing and the determination of the substantive suit , all Commercial Banks in Nigeria were restrained from accepting in any manner whatsoever to any mandate or instruction presented to them by Innoson Companies or any of its agents or nominees for withdrawal of any sum of money standing to the credit of any account maintained by the company in all the banks.

29* – However, on June 10, 2015, *Justice Saliu Saidu* of the Federal High Court, Lagos, in a Considered ruling set aside the ex parte order of September 1, 2014, by Justice Okon Abang and the writ of summoning as well.

30* – Innoson then slammed an N30 billion suit on Guaranty Trust Bank for what it had suffered in monetary terms and reputational terms during the months when the accounts of its companies in all Nigerian banks were frozen.With Innoson winning both cases at the High Court and both cases at the Appeal Court, and GTB appealing, both cases are awaiting the verdict of the Supreme Court. Meanwhile, the fresh N30 billion naira suit has just gone to the High Court to start its legal journey. ….

*Questions for EFCC *(i)* Now where is the EFCC coming from in all these?

*(iii)* Is EFCC by their action not sabotaging Nigerian economy?

*(iv)* If EFCC should to arrest any of the parties, shouldn’t GTBank who dubiously deducted Innoson money from his account and had debt of about N8billion to pay Innoson that they should arrest? Ikechukwu Emeka Onyia ©2017 For : Team * # FreeInnoson

Stand Up For Nigerians

All You Need To Know About Adsense
1.6k
SHARES
ShareTweet

1 responses on "Innoson Group VS GTBank..All You Need To Know"