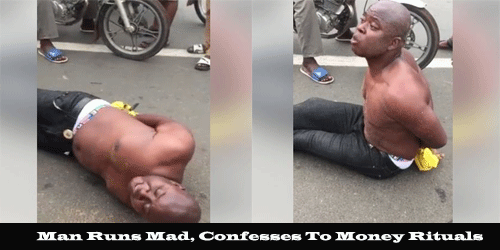 It May Interest you to watch this video footage of a mentally challenged Man, who confesses to being a money rituals

In this world of good and evil, A Nigerian man caused a huge public scene earlier today after visiting a beach in Lomé, Togo with his guys. The middle-aged man reportedly went insane at the beach before he was tied up to prevent him from further displaying in public.

The man after being tied up can be heard shouting to his friend Kenneth in Igbo dialect that he should take his ATM card from his pocket and use it at a bank close by to withdraw money before they kill him.

The man who appeared mentally unstable also confessed in the video that he did money rituals as he still called on his friend Kenneth to kiss him there because two of them are one.

He also tried to show the ring he allegedly used for the money rituals which he said was in his pocket but was restricted due to his condition of being tied up.

While the drama was going on, motorists and passersby gathered at the scene to see for themselves as the man continued to display despite being tied up.

The reason for his public display is yet to be ascertained as at the time of filing this report as no one knows what further happened to him.

And So The Man Runs Mad, Confesses To Money Rituals was Reported

Top 3 How To Make Money, Nigerians Should Avoid

How To Make Money From BulkSMS Business
1.6k
SHARES
ShareTweet