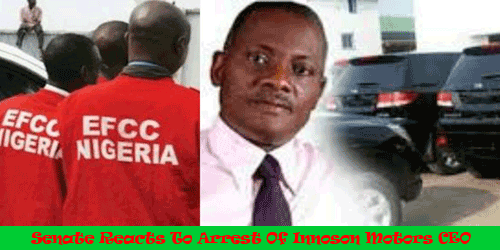 Mr Chukwuma was arrested at his residence in Enugu at about 9:00 a.m. on Tuesday.

The Senate mandated its committee on anti-corruption and financial crimes to investigate the matter and report back within 24 hours.

This decision followed a point of order raised by the Deputy Senate President, Ike Ekweremadu.

“Yesterday I got some messages indicating that Mr Innocent Chukwuma was arrested by the EFCC over a transaction between him and GTB,” Mr Ekweremadu said.

This morning I made an effort, and I spoke with him, his story is straightforward, he said he was at his house at 5:00 am Tuesday morning when he heard gunshots, and he thought they were assassins, and so he went into hiding after about two hours he saw some police and he thought that help had come,

So he came out of his hiding and ran to the policemen who promptly arrested him. As he was trying to find out what was his offence, they told him when they get to the police station they will inform him of the offence. As at today, nobody has told him what the offence is.

Any person who is arrested and detained should be informed reason for his arrest. As I speak, Mr. Innoson Chukwuma is yet to be informed of what led to his arrest or detention, but if you go through the media today, the story is that he is owing GTB. As a lawyer, I’m at a loss how a transaction between someone and his bank will inform the EFCC.”

The story he told me is that he does not owe the bank anything, he borrowed money from the bank which he has since repaid, but the bank kept charging money and withdrawing it from his account.

They set up an audit, and the auditor came to a conclusion that they had deducted more than N500 million, he was insisting on 22 percent, the bank said they would pay 17 percent so that is where they had the disagreement, and they now went to court and it gave judgement in its favour at the federal high court and the court of appeal and the matter is at the supreme court.

The fact that matter is in court and it was a commercial transaction gives no room for the intervention of EFCC, I’d like to appeal to this Senate to ensure that Mr. Innocent Chukuwma is released promptly.”

In his contribution, Sam Anyanwu, Imo-PDP, questioned the Senate’s silence over alleged continued impunity of the EFCC.

I want to ask a question. EFCC as it stands today, does it have a chairman? Because I knew in this chamber, the head of EFCC was rejected during screening because of poor performance and yet he has been there as chairman.

There was a businessman from Imo State that was killed in EFCC custody. The body is still in the mortuary until today. These are the kind of things we see in this country, why must we allow it to continue?

We have been talking about promoting made in Nigeria goods. This man manufactures vehicles, he has over 5, 000 people in his employment, he has international partners. What are you projecting before them? That he is a criminal? If we as Senate allow this to continue, there is nothing else that will ever work.

We rejected somebody here, yet he is allowed. Are there no other Nigerians who are credible to fight corruption? Every small thing, EFCC. Tomorrow, if a wife refuses to give his man sex, they will go and call EFCC. It will get to that point.”

Enyinnaya Abaribe, Abia-PDP, threw the Senate into a rowdy session when he announced that the operatives of EFCC slapped the wife of Mr. Chukwuma.

Another incident happened in his house. The wife asked a question; why are you arresting my husband? What has happened and they slapped her.”

ALSO RAED:: Innoson Group VS GTBank..All You Need To Know

Bwacha Emmanuel, Taraba-PDP, said the perpetrator of such act should be fished out and punished.

As a member of this Senate, I sponsored a motion to call for support of the anti-corruption war but as I listen to this story. If truly the wife of Innocent Chukwuma was slapped by a member of EFCC, something has to be done.

Somebody must be held responsible; somebody must lose his job. Otherwise, we’ll be wasting our time here.”

The Senate President, Bukola Saraki, noted that the EFCC would drag the country into ridicule if the issue is not addressed promptly.

As a society that we are all planning, that our country to be civilized, I think this does not speak well of the country. How a private commercial transaction has now become the focus of the EFCC.

I think this area is the focus. Whether he is owing or not, I think we must be seen protecting the fundamental rights of citizens. I’ve never seen when FBI interferes between City Bank and Ford Motors, or the financial crime agency in the UK intervenes.

We are just making a mockery of ourselves, and we really should be able to do the right thing.”

The Senate resolved to intervene in the arrest of Mr. Chukwuma while mandating its committee on anti-corruption and financial crimes to investigate the matter and report back in 24 hours.

The EFCC had on Tuesday given reasons for arresting Mr. Chukwuma.

His arrest followed his refusal to honor invitation by the Commission having earlier jumped an administrative bail granted him in a case being investigated by the Capital Market and Insurance Fraud Unit of the Commission’s Lagos office.

Chukwuma rather than honoring invitation by the EFCC mobilized six truckloads of thugs pretending to be the staff of his company to his residence, where they manhandled EFCC operatives,” EFCC spokesperson, Wilson Uwujaren, said.