The Good And Bad Sides of Lagos Nigeria 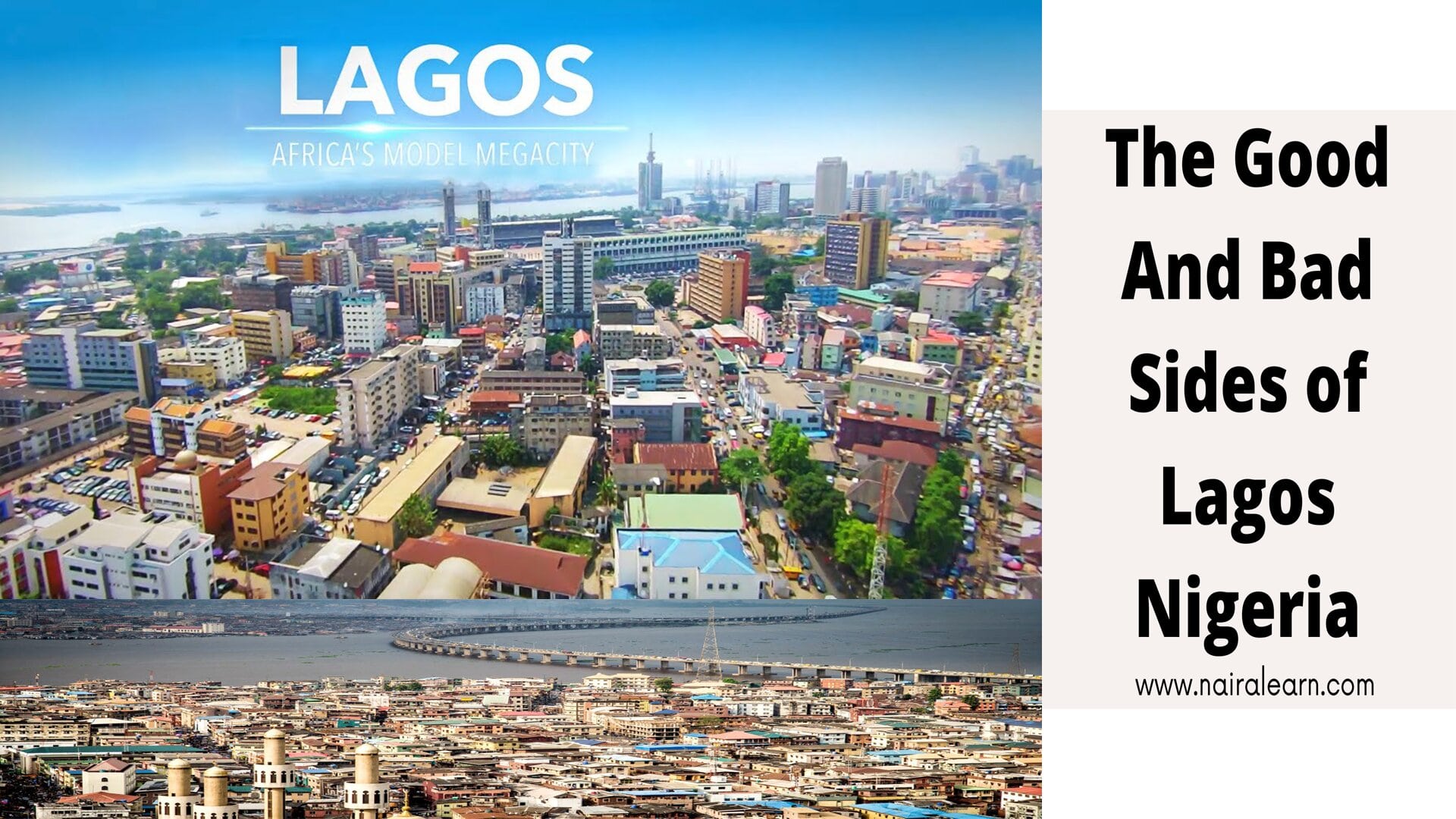 The Good And Bad Sides of Lagos Nigeria

Without a doubt, one of Nigeria’s most exciting places to be is Lagos state Nigeria. Lagos is also known as Eko city, is a place with all manners of work activities and the bubbling of life.

Whilst it has so much to offer in terms of business, fun, and pleasure, the city of Lagos also has some bad. In this write-up, I will be dwelling on both the positive and negative, the good and the bad things that are found in Lagos.

So let’s start with the negative. I mean the bad sides of Lagos. The Eco-City

This is one of the things you just have to overcome living in Lagos. So you want to figure out the appropriate time to travel or move from one part of Lagos to another.

Or if there’s an accident that happens sometimes, it just instigates a lot of traffic. Sometimes the traffic lights aren’t working properly, making Lagos traffic more of a hell

So the traffic issue in Lagos is one of the biggest challenges in the city. Especially for the people commuting from the mainland to the Island – or back and forth.

I would say that Lagos needs more bridges, more roads, pathways, pedestrian bridges, and stuff like that. Putting these in place would solve the traffic issue of Lagos greatly.

Nonetheless, trust me…traffic regulation in Lagos is a big deal. and the government are yet to come out with a working plan and best get the Lagos traffic issues solved once and for all

Truth be told, the city of Lagos is not poverty-friendly. It’s the blunt truth. And this is a challenge because not so many individuals have the wherewithal to afford the luxury.

This means, as commercially booming as Lagos would be, so many residents are struggling to cope with the alluring luxuriousness in Lagos.

Days have gone by when goods and essential needs are affordable in Lagos, today surviving in Lagos with low income is risky as prices of things keep the sky rocking every day

There is this saying, that says ”You really won’t enjoy Lagos if you’re poor and of a low-income cadre”.

Life would be very hard for you if you’re a low-income person living in Lagos. The system here is set up in a fashion that discomforts the needy any time any day. In other words, the city is practically not low-income-friendly.

Like in all other parts of Nigeria, Lagos, being the megacity that it is, there are poor infrastructural facilities in Lagos that are inadequate and begging for more.

There’s a poor electricity power supply and as such, people tend to depend more on their generators for electricity. So most of the time people go buying diesel, petrol to fuel their various generating sets just to have electricity to either run their businesses or power their homes.

Some could resort to solar energy as an alternative. So the issue of 24/7 power supply is a mirage here in Lagos and across Nigeria.

The road network is laden with numerous potholes in different places too.

Like for water, most people have to build their boreholes, pump water for themselves – there’s no centralized power supply system.

Like on the Island, the water quality can be very poor looking. So one would have to predominantly depend on buying bottled water consistently if you must make use of good quality water.

In Lagos, to achieve certain set goals, land a good job, a big contract, and stuff like that, you have some sort of serious connection.

You’ll need to know someone – who knows someone somewhere to get you connected for some of your achievements to be enabled. In Nigerian parlance, they call it “man know man”.

This means that despite your skills and prowess, you need a kind of high profile to connect to get things flowing.

In Lagos, like all through the Nigerian economy, there’s a high unemployment rate. As a result, so many people tend to be more entrepreneurial, hustle, and try to develop skills by which they can make money.

And a lot of people don’t get well paid. The majority of the working populace exerts so much energy for a very little financial reward. It’s one aspect of Lagos that is not good.

The inequality level is disparaging. I would say this is the major reason why the hustle culture here in Lagos is high and competitive.

Despite the infrastructural deficit in Lagos, the maintenance culture is quite poor. Most Lagosians would rather build lovely edifices, houses, facilities…

Just nice things; but the maintenance culture seldom works. So much later, a lot of things deteriorate due to a lack of maintenance. It’s marvelous how this culture is from the bottom to the top.

Would it be wrong to say that “littering” is the middle name of Lagos? (Amusing)! But it is what it is. There are people always throwing trash in the public and everywhere.

And I think this is the fault of the citizens. However, by observation, I think if there are trash cans set in designated locations, it’ll help mitigate the littering in Lagos. And I am only just guessing.

One point that needs to be made clear, some places in Lagos are clean and less filthy than some areas example is the Island. To achieve hygiene on the Island, a system is set up that employs personnel to sweep and clean the place regularly.

Although it is replicated in the mainland side of the city, the residents’ mentality, in general, isn’t hygiene-oriented. What matters most is the hustle. Anything else is not taken seriously.

People simply throw things out of their cars easily. This is across the length and breadth of Lagos.

That said, there are some fascinating things about Lagos. These are the positive things, the good sides of Lagos Nigeria that I want to share with you.

So let’s proceed with the positive. I mean the good sides of Lagos. The Eco-City

There’s virtually everything that you would want to take. From local to Intercontinental cuisines, food is abundant in Lagos, foods that money can buy.

The good thing about the city of Lagos is that not only is there an abundance of Nigerian or African foods, they’re also places where you can get foreign intercontinental dishes at the available Chinese, Indian, Lebanese, Ethiopian, etc restaurants.

You can comfortably work down the road and purchase grail chicken, grail fish, suya, and the rest of them.

Labour is so cheap in Lagos. In other words, you can easily hire a Nanny, Chef, laundry attendant, gardener, etc, and you pay cheaply for their services.

Even things like barbing or braiding of hair, hiring a swim coach, the amount paid for these services can be compared with the charges in the western world. It is way lower here in Lagos Nigeria.

>> So Much Social Life & Entertainment

For some reason, perhaps because there’s usually one celebration or party going on within the city, Lagos is reputed for a very active social lifestyle.

For a fact, it is the epicenter of fun all over Nigeria. Here in Lagos, people love get-togethers, end-of-year celebrations, just regular gatherings that inspire social life.

There’s so much entertainment, concerts, partying and – just something that ignites fun which eventually socializes the people.

Trust me, there’s absolutely no dull moment living in Lagos. If you’re a fun freak – then Lagos got you covered!

Anyone who knows Lagos knows that it is a city of hustle. For the record, it is the commercial nerve center of Nigeria. Not only that, Lagos is a business-friendly city.

The locals love to trade and are very receptive to foreign investors. Whether you’re a starter or a mega business mogul, you’ll certainly be inspired to trade while in Lagos.

They’re also opportunities to grow in Lagos. Although one of the major things holding people back is the lack of capital to start up while some na the absent of skills, which there can easily acquire live from NairaLEARN Course Here

Nonetheless, if you’re zealous enough, you can achieve a lot of your goals and objectives living in Lagos. There’s a lot to buy and sell in Lagos. The city allows you to grow as you desire. You can start from bottom to top, that is Lagos for you

Let me put it this way, you can easily make an impact in Lagos (especially as a diasporan). You necessarily do not have to make an impact by giving money to someone.

But you can coach, counsel, offer mentorship programs, or offer a small capital to help someone kick off a small business that can grow with time.

ALSO READ: Obi Cubana, Dangote all Billionaires With Jack of many trades, why we need to learn from them
ALSO READ: Politicians Are Nigeria’s Greatest Problem- Jega

Or maybe help to pay for school fees, support an initiative, a humanitarian campaign, and patronize a business – things like that. For a typical Nigerian, the smallest of kindness means the whole world and goes a long way. As a culture, the people are usually very appreciative.

There’s practically no limit to what you can accomplish in Lagos. And this is more tenable especially when you have the money. The field is just wide open to you or everyone.

Go here to get access to the Entire Nigeria GSM Numbers Database, along with Lagos State Database, The Nigeria email databases, and many more

Also Checkout the over 172 Countries Database here, we have made all this available to assist all SME’s in leveraging the power of leads in growing their business

How To Get Hard And Sustainable Erection All Time

0 responses on "The Good And Bad Sides of Lagos Nigeria"