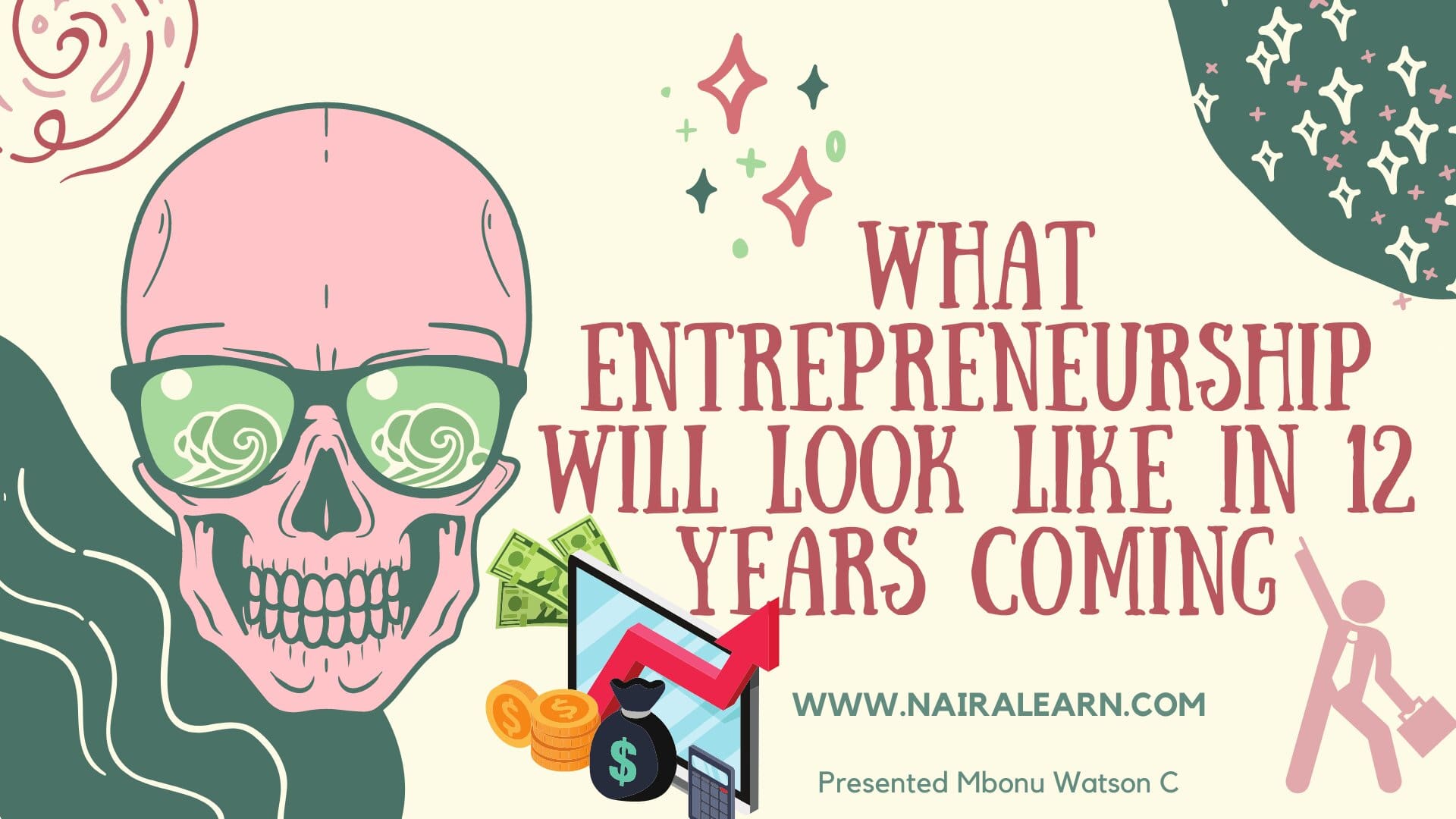 Have you ever wondered?

Now hear this, the next coming years will be different from what will have now and how best you are, how your prepare for those days, years coming matters a lot

The reality is that in the next twelve years, entrepreneurship will change dramatically and these changes will happen so fast it has already started and many people like you and I have begun to key into it

So is important that you know and work toward reshaping your business, your entrepreneur career to key into these changes

This is because advancements in technology and medical science will lead to several new businesses. In addition, there will be an explosion in the global population leading to more people entering the world market.

It is estimated that by 2030, 10% of the world’s population will reach retirement age. There are many reasons why this is happening with one being medical advancements that allow people to live longer than ever before.

In just a few short years, we have seen a resurgence of entrepreneurship with the launch of new apps and services that have changed the way we live. and in the coming years more robotic web and apps are coming

In just 12 years, it is possible that what entrepreneurship will look like could be vastly different from what it is today. There are 3 potential technologies, in particular, that may change the landscape of how entrepreneurs work: Namely

Get The AdMob Masterclass Here, and discover the smart way to develop Mobile apps, list your mobile app on the app store, apply for Admob Network and start making cool cash online. You can make over 300k Monthly: Get the Step By Step Course On How To Create Mobile Applications Here

The next 12 years will bring major changes in the world of entrepreneurship. Today, the majority of entrepreneurs are between the ages of 25 to 34, but by 2020, that number will drop to 14. Yes, more entrepreneurs from the age of 14 will emerge in the next coming years

Younger generations are more risk-averse, so this shrinking percentage is likely due to their reluctance to take risks.

Furthermore, entrepreneurs who work for themselves tend to be more satisfied with their lives than those who work for others.

The Next Phase Of Entrepreneurship Has Already Started:

That In a few short decades, we’ll see an entirely new generation of entrepreneurs emerge. The current crop of young people entering the workforce today has grown up using technology as part of everyday life.

They’ve been exposed to social media and smartphones from birth. Their parents were also raised on these technologies; they grew up watching television shows such as “Friends” or playing video games at home, In Africa Nigeria, some of them are even exposed to Big Brother Reality shows. while the Chinese government are heavily training their kit, children to enhance the next tech generation, African government also have a lot to do, not just the government but the Parents

Most of the children you see today will in the next 12 years coming to assume the position of top entrepreneurs in the world, there will even complete among their parents, uncles, and aunties

Because these kids are accustomed to being connected all day long, every single day. And this is just how it’s going to be for them—they’re not going back!

The future of entrepreneurship lies within this next wave of tech-savvy millennials. This group will drive innovation in our economy by creating new businesses that solve problems and create value.

But we need to make sure that their entrepreneurial spirit isn’t stifled by a lack of access to capital. We must ensure that there are more opportunities available to everyone

Solar Energy Embedded in Your Clothing: A New Way To Power The World?

By now you’ve probably heard about the solar panels embedded into clothing. It seems like an idea whose time has come. And it is, but not for the reasons most people think.

These solar panels aren’t even made from silicon or any other material used in traditional photovoltaic cells. Instead, they’re made out of carbon nanotubes—a form of graphite with unique properties.

Carbon nanotubes have been around since the 1980s, but only recently have scientists figured out how to use them as part of electronics.

They can be woven together and then coated with a conductive polymer that allows electricity to flow through them. This makes them ideal for creating flexible circuits.

But what if we could make something more than just a circuit board? What if we could create a new kind of battery? That’s exactly what researchers at Stanford University did last year when they created an energy-storage device called a supercapacitor and this solar energy embedded technology may rule the world a few years from now

This phase of what Entrepreneurship will look like in 12 years has already started as more women are not into business, more ladies are striving and making waves in our world of today

The woman has indeed moved from housewife, depending on men to creating their world there are these thread sayings, that the future is female, possible its because more and more women in today world are stepping up and this can only get better, get increased in 12 years from now

In today’s world, the number of women starting their businesses has grown by nearly 50 percent in the past decade, according to data from the Census Bureau.

And these numbers can only get increased in the coming years, more women will join the entrepreneurship field, and indeed the future just as it was said, maybe female

The years when women believed in what they are told years ago, that they belonged to the other room has gone, these days women are out to make a big impact in our world of entrepreneurship

Back then, in those years, women have been told all along that they cannot be successful as business owners because they will not succeed financially or professionally.

They were taught that if they did start a small business, they would fail. So what does this mean? It means that we need to change our thinking about how people view themselves and others. We must stop telling girls and young women that they should only aspire to be stay-at-home moms, that there are only good in bed, and other things that belittle our women

In Africa Nigeria where I come from, then women are told that they belong to the other room and kitchen, women have begun to change these tell and today stepping up, so we are expecting an increase of women entrepreneurs in the coming years

Increased Role of Virtual Reality (VR) in Education and Training

The use of virtual reality technology has been growing rapidly over recent years as more people become aware of its potential benefits. The field of VR education, which includes both educational software development and research into how best to incorporate it into learning environments, is still very much a developing area. However, there are already many examples where VR technologies have had an impact on teaching and training. For example:

A study by the University of California at Berkeley found that students who used VR headsets while studying for exams performed better than those who studied without them.

This suggests that VR can be effective when applied appropriately. * In 2014, researchers from Stanford University developed a virtual reality system called “The Virtual Human” (VH) to help people with autism spectrum disorder learn social skills.

ALSO READ: The Power Of Thank You In Business, By Mbonu Watson
ALSO READ: Biggest Mistake Most Business Owners Makes And Why You Should Avoid Such

The VH was designed as a way to teach children how to interact socially with others. It consists of two parts – one part simulates real-life situations such as going out shopping or playing sports; the other part allows users to practice interacting with each other using avatars.

Conclusion: We will see all these trends.

In conclusion, entrepreneurs will continue to take on new challenges and shape the world for the better.

They say that entrepreneurship is in our DNA, so it’s only natural that the spirit of entrepreneurs will never go away. Defying obstacles, changing old habits, and using data to make decisions are all hallmarks of entrepreneurialism, but these qualities will only grow more pronounced as time goes on.

This article has demonstrated how entrepreneurship may change in 12 years, but it won’t evolve too much. Entrepreneurship is an ever-evolving force that continues to adapt to the needs of society

Facebook To Meta, The FOUNDER’S LETTER 2021 By Mark Zuckerberg

0 responses on "What Entrepreneurship Will Look Like In 12 Years"