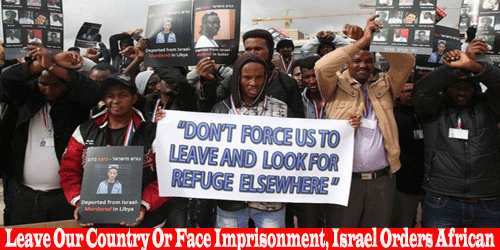 A Notice Of Leave To All African Migrants In Israel, News Reaching Us From The BBC News, Reports That The Israeli government has issued a notice leave to thousands of African migrants In Israel to leave the country or face imprisonment Come April 2018.

Thousands Of African migrants in Israel will be given up to $3,500 (£2,600) each to leave Israel within the next 90 days. As was reported

They will be given the option of going to their country home or best go to another third countries. 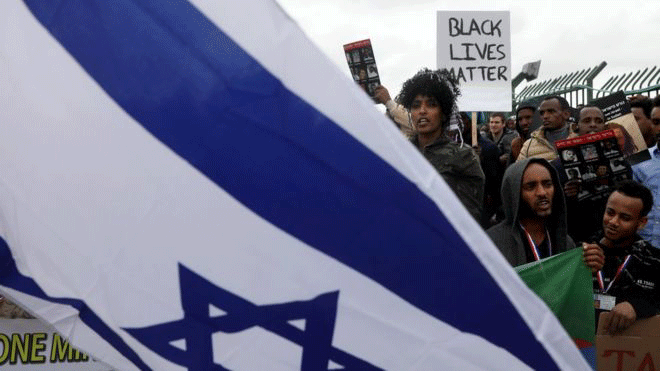 The Israel Authority Said, Here In quote ”If they do not leave”, the Israeli authorities will start jailing them from April 2018.

According to the UN refugee agency, the controversial plan by Israel Authority to African Migrants To Leave violated international and Israeli laws. Israel’s unwanted African migrants, The Israeli government says their return will be humane and “voluntary” if they do note leave.

The order exempts children, elderly people, and victims of slavery and human trafficking.

African asylum seekers, mostly from Eritrea, who entered Israel illegally during the past years, hold placards showing migrants who they say were killed after being deported to their country, during a protest against Israel’s deportation policy in front of the Supreme Court in Jerusalem on January 26,

DISCOVER HOW TO START A PROFITABLE EXPORTATION BUSINESS: Get The Exportation Business Video Course

A spokesperson for Israel’s Population and Immigration Authority told the BBC NEWS And Other Media Houses That there were currently 38,000 “infiltrators” in Israel, of whom just 1,420 were being held in detention facilities.

Israel uses the term “infiltrators” to describe people who did not enter the country through an official border crossing.

Many of the migrants – who are mostly from Eritrea and Sudan – say they came to Israel to seek asylum after fleeing persecution and conflict, but the authorities regard them as economic migrants.

Israeli Prime Minister Benjamin Netanyahu has claimed that an unchecked influx of African migrants could threaten Israel’s Jewish character. so they should leave the country, As was Reported

A Litre Of Fuel Hits N350 In Kaduna